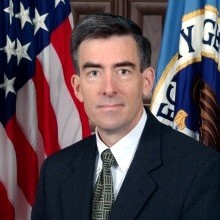 Mr. Inglis is a former Managing Director at Paladin and currently serves as the National Cyber Director. He is also the former Deputy Director and senior civilian leader of the National Security Agency. Mr. Inglis acted as the Agency’s chief operating officer, responsible for guiding and directing strategies, operations, and policy.

Mr. Inglis began his career at NSA as a computer scientist within the National Computer Security Center. His NSA assignments include service across information assurance, policy, time-sensitive operations, and signals intelligence organizations. Promoted to NSA’s Senior Executive Service in 1997, he subsequently served in a variety of senior leadership assignments culminating in his selection as the NSA Deputy Director. He has twice served away from NSA Headquarters, first as a visiting professor of computer science at the U.S. Military Academy (1991-1992) and later as the U.S. Special Liaison to the United Kingdom (2003-2006).

Mr. Inglis’ military career included nine years active service with the US Air Force and twenty one years with the Air National Guard from which he retired as a Brigadier General in 2006. He holds the rating of Command Pilot and has commanded units at the squadron, group, and joint force headquarters levels. Mr Inglis’ significant Awards include the Clements award as the U.S. Naval Academy’s Outstanding Military Faculty member (1984), three Presidential Rank Awards (2000, 2004, 2009), and the Boy Scouts of America Distinguished Eagle Scout Award (2009).

Mr. Inglis currently serves as a Board Member of the Baltimore Area Council, Boy Scouts of America.